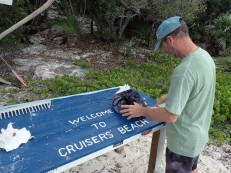 I’ve been a bit caught up with weather fronts rolling through stopping our push south. ‘Grumpy cow’ nudges into the daylight which in truth is bloody ridiculous as we are in the frigging Bahamas. My aspiration is not to turn into Elton John who once called hotel reception to complain about the wind and requested that the management turn it down a bit.

We had a lovely relaxing week with Jenness and Patti. Pigs living on a beach challenges my view of normality. But they seemed to be in good shape and most people who visited while we were there turned up with vegetable scraps which were devoured with intent. The well known Olympic swimming race, the 100m doggy paddle can now be renamed the 100m piggy paddle. These babies were the water equivalent to the colloquial saying ‘pigs in sh*t’.

Our guests flew out from Black Point Settlement rather than Staniel Cay, changing their flights after we met Ester, who along with Lorraine and Ida seem to run the whole village shebang. Ester’s roles included Flamingo Air representative, Bahamas Telecom helper, shop assistant, pizza influencer, T-shirt recommender, accommodation booker. speed boat finder etc etc. She was a handy person to know as the flight change was necessitated by another front rolling in and us not really wanting to move anchorages.

We’re now off Lee Stocking Island, as another front passes over. Yes, it’s Elton John windy again today. Today being Saturday. The next front will arrive Wednesday. Getting here, the water was in boating terms, very skinny. When we first stared sailing in the UK, we wouldn’t anchor in less than 4 metres. We were worried about hitting the bottom. Grace draws 2 meters. On our trip down here we were flying long at 6.7 knots with just 0.8 metres under the keel at one point. A little clenchy.

We will head to what has been described to us as ‘the adult holiday club’ early next week. Georgetown in the Exumas is apparently a big hub for social activities. Shouts go out on the radio in the morning for partakers of yoga and volleyball and beach bbq’s and goodness knows what else. I will report back having assessed what’s on offer. But more importantly we can buy some vegetables which (other than 2 avocados) I last bought in Florida three weeks ago.

3 thoughts on “Pigs and fronts”