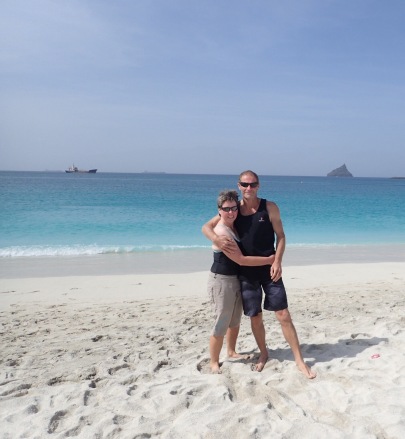 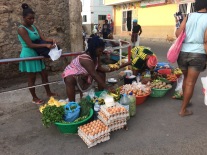 Heading out of town

That’s a party. You wake up at 9am on 1st January and the sound system on the Main Street is still pumping out tunes. Not for long admittedly, only for another 15 minutes or so to complete the 12 hour music festival but I hold my hands up and say ‘Good effort Mindelo’.

New Years Eve was a top day. My hair was starting to look like a bush once again. Upstairs in the corner of the covered market we stumbled across a women’s hairdressers. African hair is somewhat different to English hair, but hey, scissors are scissors and I needed a cut. I’d describe the lady who cut my unruly locks as ‘A Big Mamma’.

With no idea what I was going to end up looking like, she started pulling and chopping quite aggressively as she circled round me with her scissors, perched on a stool on wheels. The best bit was when she’d finished she threw both her hands up in the air and declared ‘magnificent’. Can’t argue with that!

With my new magnificent haircut, the end of year festivities started. We visited another English boat for drinks at 7pm then back to ours as Dan & Emily and Hugh & Miranda were coming round to eat. Dave had rigged up some led lights in the cockpit so the boat looked lovely. We’d each prepared a course so ate like kings and had a truely memorable evening. Dan and Emily are off to Brazil then Argentina and finally Chile, departing tomorrow. We have sailed in their company on and off since September. Bye guys, we’ll miss you. Safe sailing.

At 11.45pm we left the boat to prepare for the fireworks. I think the whole of the island population was in town. Mums, dads, granny’s, kids. There was a great atmosphere and the fireworks lit up the bay and the crowds whooped and cheered.

We then became part of the slow moving melee which headed up the Main Street towards the sound stage. There were old boys swaying and dancing with such rhythm, looking super cool, conga lines of teenagers and little kids bopping away. The bass cranked up and we headed back to the relative calm of the boat for tea in the cockpit before bed at 2am.

After a slowish start to NYD’s, we headed off on cobbled roads in the back of Manuel’s pick up truck to the other side of the island in search of surf for Hugh. Manuel helped us find a wild deserted beach where Hugh caught some waves and the rest of us played in the surf. Warm water. Nice.