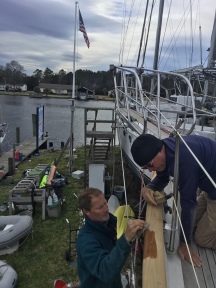 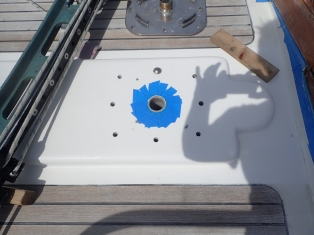 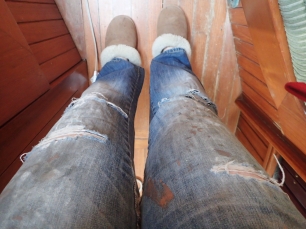 Firstly, the Swedish boys are safe after a bit of (one hell of) a pounding and some significant breakages. They had youth on their side and now have a story to tell in bars across the world about leaving Beaufort, North Carolina in dodgy conditions and being pitched about like a drunk pole vaulter in a malfunctioning washing machine

I have become that character in a Two Ronnies sketch this week, the one who continually confuses their words. My week has been mostly stood on a trellis removing old varnish or painting new in its place. When I say trellis, I don’t mean trellis at all. I mean platform or at a stretch, trestle, but the word trellis is etched in the front of my brain and no amount of sand papering will rid it from my vocabulary. Perhaps I need an Australian cricketer to help. Sorry, American people, you won’t understand that.

My great Aunty Gladys was a legend and occasionally confused words too. When the video player was a new fangled addition to households up and down the country,  she bought one. It never played video tapes as far as I am aware. She didn’t know how to use the machine. It was the most expensive digital clock you could buy.  But the best bit was her name for this contraption. She called it her ‘vi – day – o’. Classy.

For you boaty people, I will share with you the list of jobs we have ticked off being here when we are floating in the water. Not before. After another week and a half of delays because the main engineer here was off sick, things are moving again and our mast may be vertical on Friday after a long rest in the horizontal position. Fingers, toes and trellises crossed. 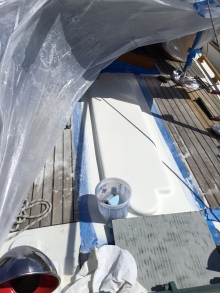 Whisper it quietly. The mast may go back on next week. That’s a definite maybe. Good to have something definite for a change. Feels a bit like dry water or still wind. A paradox of unfathomable proportions. We are closer. As I type Wilson is polishing the gelcoat he applied earlier this week. It looks fantastic. The work quality is of a high high standard. It will be impossible to tell the mast has been off, a hole has been dug in the deck and refilled.

That said, I personally prefer jobs which show a discernible difference on completion. Our varnished deck boxes (currently on coat 7) look amazing. I can visibly see the work that has gone into these. They will provide an incentive and inspiration to carry on sorting out the rest of the woodwork that needs attention. See how long that lasts!

Dave’s current wrestling project, realigning the engine is another job that will be hidden from view. New engine mounts will be in place, the prop shaft will sit quietly and precisely linking the prop to the gear box and we will have less vibration when we run the engine. I’m told.

A little personal goal I set myself was to run the loop trail that undulates around Fort Macon. I’m not a natural runner. Don’t think Mo Farah or Seb Coe with stylish leisurely bouncy gaits. Me running looks like hard work. Think more stuttery, unnatural, painful looking effort. Persistence paid off though and running the 3.3 mile loop was accomplished earlier this week and repeated again this morning.

A sailing boat did depart this week. A 27 or 28 footer which was standing abandoned in the yard when we arrived, having not moved for over 3 years. Well two youngish Swedish guys turned up, worked on it for 3-4 week’s and off they went towards Jacksonville. The weather was pretty hideous rain with a dashing of strong winds but depart they did. Emails have been sent and we hope to hear from them in the next day or so.

The speed of their arrival and departure did make me question what we’ve been doing here for an extended period of time. And how their boat was ready to go. Dave pointed out their size, simplicity ad lack of systems. No bathroom, so no plumbing needed; no fridge so limited power generating capacity required; no space so limited possessions possible. And generally little comfort or frills. Maybe when we were in our late 20’s or 30’s but we have have standards now!

Sometimes you just have to miss out on things. There are choices to be made….do A or do B. A variety of reasons help steer your choice; maybe cost, the amount of pleasure one will give over the other or simply time available.

The latter was the reason we missed out on visiting America’s Largest Pork Display. Several vast billboards taunt and tease as you drive along. Only 3 miles to go!!! Can we really miss this opportunity? Will we ever drive this road again? How BIG is this display? What exactly is on display? Are the staff dressed up in costume?

The reality is we just don’t know. And I like the shrouded mystery. It’s a delight that will have to wait for for another day. A special day trip like going to the Smithsonian or the Tower of London. I was going to write London Zoo but the sign does say Pork not Pig so comparing a live animal exhibit to large butcher’s shop is probably not appropriate.

The reason we passed ALPD was that we took a road trip to Cincinnati to visit family. Even with an 11 hour drive to get there and get back, we had a fabulously relaxing weekend away from boat chores. Included was a visit to a Bourbon Distillery, plenty of Premiership Football which made me happy, a Sunday morning walk in the woods, (too much) red wine one evening, a games afternoon and I spent two hours in the bath just because I could.

The games afternoon consisted of Dave beating me heavily at Pool. He plays with an ambidextrous flair, left handed or right handed. Doesn’t matter. On about game 7 of solid defeats, I cheered as I potted the black ball joyously only for the white ball to roll painfully slowly up the baize and drop into the corner pocket. Rats. Insert a stronger word here if you feel my pain.

On to table tennis. More my game. A moving ball. Thankfully I restored some pride and he walked away from the table with a big fat zero after a few games. I was immediately brought down to earth as I played cousin G who with his ‘chippy choppy spinny’ game took two games off me in quick succession. I did try to demolish the Tower of London Lego model which lives on a shelf at one end of the table with an over exuberant wind up to a forehand smash. You can see it in the picture behind Dave playing pool. Thankfully the damage looked to be easily repairable. Not an incarceration offence.

Boat news…blah blah, waiting for gel coat application but it needs to warm up a bit first, prop shaft back in, engine alignment tweaking, blah blah…. 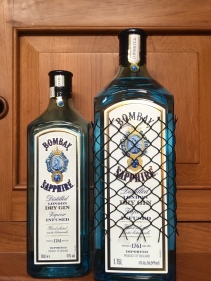 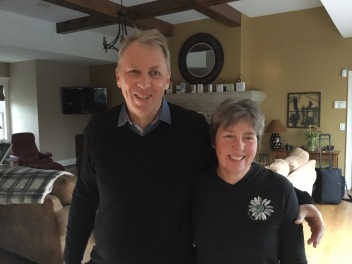