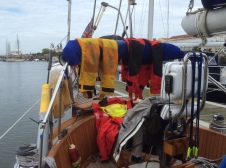 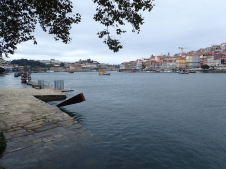 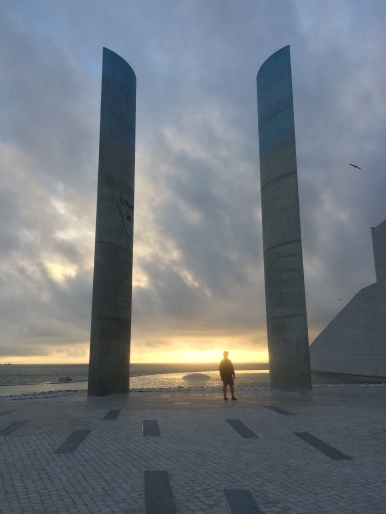 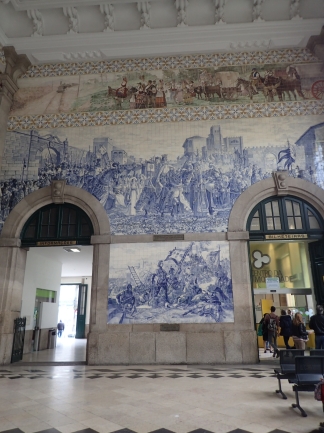 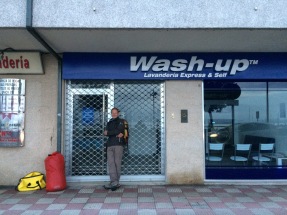 It’s not all a glamorous life

A particularly windy weather forecast is looming over the next couple of days so here we are holed up in Oeiras Marina, a short train ride into Central Lisbon. It’s been an eventful 48 hours.

We crawled into Péniche from Porto a couple of nights ago in darkness and hideous fog. In meteorological parlance you could see bugger all. It was bum clenching stuff and big thanks go to a Danish Yacht who talked us in and allowed us to moor up along side them for the night. We took a bottle of wine over as thanks and chatted to them for 20 Minutes before heading off to bed. They mentioned they plan to go trans Atlantic this December so Dave casually asked the skipper if he’d crossed before…… the response, this will be my 41st crossing. Guess that is officially a yes then.

From Peniche, we motored on a glassy oily sea to Cascais, the upmarket holiday resort which attracts the rich and trendy from Lisbon. We anchored in the bay, dinghy –ed ashore then walked around the resort, lowering the tone and designer clothing count. I had had my hair cut recently in Figuero de Foz, so at least I didn’t look like a bush too.

And on to Oeiras. There are a number of bars and restaurants on the front so after mooring up last night, we moseyed down the strip until deciding on one in which to spend our ever diminishing euros. Bang… as soon as we got in the door, we were ‘Phat Bouy – ed’. The Phat Buoys are an unofficial possy of guys who get together once a year to sail (and party). There are 8 members, 5 were on this trip, 3 Canadians and 2 Brits. In their 16 years of sailing together they have visited amongst other places Newfoundland, Brittany, Turkey, Iceland, Greece, England and the Channel Islands and this time Portugal.

There was no allowable resistance to their hospitality and I know Dave and I both enjoyed the mad couple of hours we spent in their company. Dressed in matching embroidered shirts and sailing jackets, they regaled tales of previous trips, ice bergs, sleeping on deck to avoid snorers, trophy winners and excess baggage charges to fly said trophy round the world so it can be awarded to a one of their members on the last evening of their sailing trip each year.

This morning the Phat Buoys had departed when we emerged to move the boat to another spot in the marina. In moving from one berth to another, the gear cable snapped so we had no gears and hence no useful engine and steerage. Thankfully we drifted reasonably gently towards the fuel dock and two marina guys who planned to take our lines in the new berth, legged it round the pontoons to help. They weren’t dressed for the 100m sprint in their waterproofs and boots but we’d be happy to award them both medals. Could have been so so much worse and expensive. Did I mention expensive?

Dave removed the cable and threaded a tracer line so that’s how we know it had sheared. Nuno, a really helpful guy at a local chandlery will attempt to get us one asap. To calm our nerves, we treated ourselves to a late lunch in Lisbon and walked round the sea front as a reasonably forgiving way of digesting the mountains of delicious food that we had consumed. There will be no vampires on our boat this evening due to the garlic leeching out of our pores. 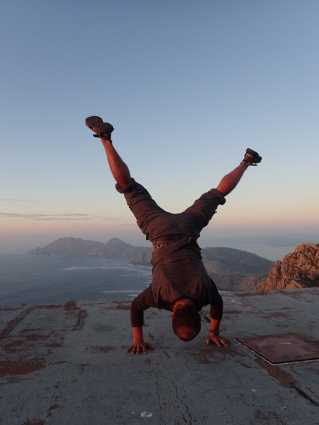 Joe Simpson wrote a book called Touching the Void based on his real life experiences when he broke his legs on a climbing expedition. He was presumed dead then crawled for 3 days down a mountain to get to the campsite just as the rest of the expedition members were preparing to leave. It’s a reasonably well know tale and even if you’re not interested in mountains, the book is a good read. And actually you don’t need to know anything about mountaineering to enjoy reading it.

One of the notable things that he mentions in the book, which he thought about during his three day crawl is that he wasn’t scared of dying, but he was scared of dying alone. That element of human contact is so important to feeling connected and valued.

I’m fortunate to come from a close family and have close friends who provide lots of love, support and smiles. I mention this as I returned to the UK for a couple of days this week to attend a family funeral. My Aunty Margaret was in her 80’s, had lived a full life and was always generously interested in what family and friends were up to. The tribute written by her three children, my cousins, Graeme, Sandra and Christine was informative, funny and loving. Spot on in fact.

I know funerals are by their very nature sad occasions so please take this next comment in the spirit in which it is intended. On the plane and train back to the boat, i felt I’d actually had a lovely time seeing family and friends and felt totally connected even if Dave and I are geographically distant from people. It’s comforting to know my Aunty Margaret was totally connected too. It was an impressive turnout.

Back to practical things, it’s a bank holiday in Spain today which explains why the supermarkets are shut. Timed that badly. We’re about to head to Baiona this afternoon. Probably have to motor as there’s not much wind. That means we are leaving the Spanish Rias behind. It’s been a pleasure. 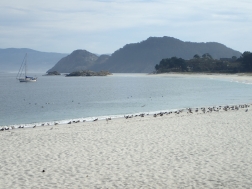 Hope to find a spot to sit and read a book …

One side open to the Atlantic, one side sheltered

Choosing  only 8 records to play on your desert island is tough. You’ve probably done this too mulling over the dilemma. And my choices do change depending on mood, circumstance and sometimes just hearing a great record and thinking, bloody hell, that’s ace, I really like that. There are however some non negotiable tracks ….

The remaining four allowable tracks as I said, weave in and out of my consciousness. If you’re at a loose end, let me know a couple of your tracks and why….I’m just being a bit nosey.

The reason for the angle of this blog, is that we are on our own desert island. Islas Cies is an island in the national park, not far from Vigo or Bayona. I’m not really going to say much more about it other than look at the photos and enjoy. We are.

It’s not all sunshine and light though. We did have right old pea soup fog last night where seeing the boat from 50 to 75m away was impossible. Glad we left the anchor light on otherwise we may never have found her in the dark returning on the dinghy. Seeing Grace loom up out of the darkness was quite spooky. And lying awake at 4am hearing an engine from another boat that could have been 1 mile away or 20m away was disturbing. I’m thinking, please see us. Don’t the crash into us. We have survived the night intact and will walk up to the lighthouse at the southern end of the island for sunset and views tonight.

Off to Vigo tomorrow. Big city will be a big contrast to here.

Not many photos here. Slow email in our beach bar.

We’ve been liveaboards, boat gypsies, transient souls, work avoiders, travellers (substitute your own word here) for over 100 days. I know that because I read an article in the british press that it’s 100 days since the Brexit vote and we moved onto the boat the Friday the results were announced.

I’m glad to report Europe is still welcoming Brits and as U.K. Representatives, I hope we are received as doing our bit to be friendly, non judgemental, interested and happy to spend money in whichever country we are in.

We went into a café at lunchtime yesterday in Aguino in the Ria de Arousa. We tapped into their free wifi for 45 minutes and bought a couple of beers – cost €3.40. In that time we were brought two little tapas dishes each, one with a few roast potatoes, a mini sausage and a small spare rib and the second with a small portion of octopus stew. Both delicious and flavoursome. As if that wasn’t enough a bowl of crisps and a bowl of olives arrived too. That was lunch unexpectedly taken care of. All for about £3.00.

It’s Sunday. Dave is writing a proposal. It’s sunny but it was a bit nippy this morning before the sun developed a bit of warmth. First indications of autumn maybe…. time to get further south. The Ria here is beautiful and rocky, not unlike Brittany or the Channel Islands. We motored in close to shore through a narrow channel to save 3 or 4 miles. It sharply focuses the mind seeing the rocks looming as we followed a dogleg of transits. How accurate is the chart plotter? Stay on the bearing, 105 degrees to the green and white tower. Breathe, we’re through.

There are some islands off the coast here which form part of a national park. We have applied for a permit to visit and been ‘approved’. So Isla Ons we hope to visit you this week.

Dave’s rope work skills were put to the test a few days ago when Dan and Emily snagged their anchor on a massive log in Muros harbour. The log was longer than their 27 foot boat, incredibly muddy and stank. Between us the log was wrestled and returned to the depths for the next unfortunate boat who picks that self same spot. It was too unwieldy (and smelly) to take to the shore. Sorry.