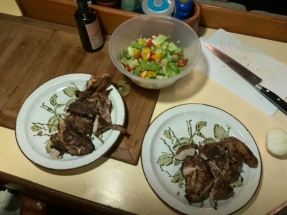 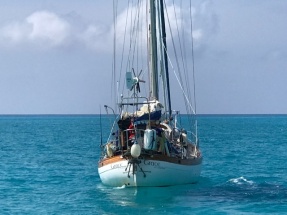 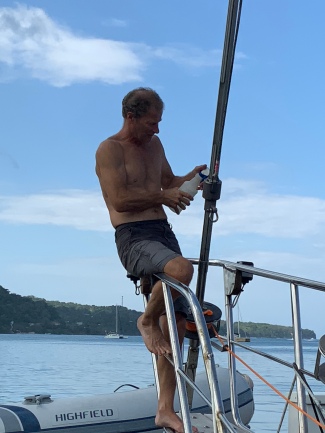 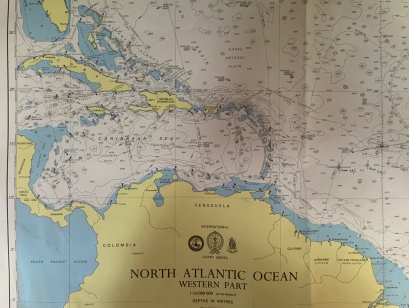 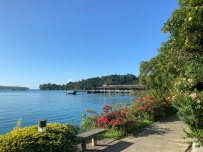 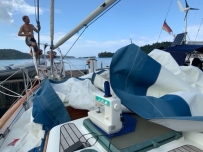 We’ve met folk of all nationalities who work from their boats to contribute to their individual ship’s biscuit fund. We indeed still do bits and pieces for Unique Solutions, our UK business.

There are people who are striving to fund their travels through video blogging. A tiny tiny handful of crews are pretty successful ($10,000 an episode I’ve read) at this but we’re talking an incredibly small proportion. And it seems to me, the more successful your vlog, there’s more work required to ‘feed the beast’ and keep it going. And going and going every week with something new and interesting to say.

Our staring position was always to do less not more.

My new German friend Olaf works remotely as a software engineer. He and his wife have been boat-based for 8 years. I hadn’t seen him all day so I asked him if he’d been ‘tippy tappying’ away on his computer. His response to this was to laugh like a drain in uncontrollable glee.

I’m not sure if tippy tappying translates into something different in German. Doesn’t matter, seeing him laugh like that made my day.

I mentioned this conversation to a friend in the UK. The response….They will have a word for it. It will have at least 8 syllables and 32 letters.  That’s why all German books are in Landscape.Tippenzietappenschudenfreitche. That made me laugh too.

We are in Jamaica, planning to depart for Panama on Wednesday. The winds and the seas in the western Caribbean can be a bit ‘dizzy rascal’ so we’re waiting for a smoother, mellower ‘rat pack’ forecast.

In the meantime, Dave has made some modifications to the steering / autopilot system. I’ve replaced the fraying stitching on the head sail. Jerk chicken has featured in our diet. It’s about a year since we last had some and my lips protested and demanded cold liquid prompto. It’s got a lip swelling kick. But worth persisting as it is pretty darned tasty too. 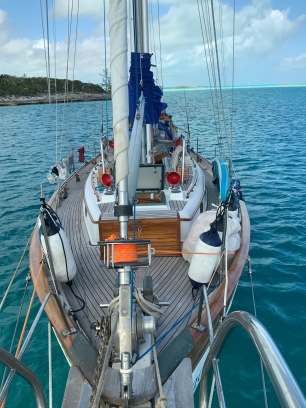 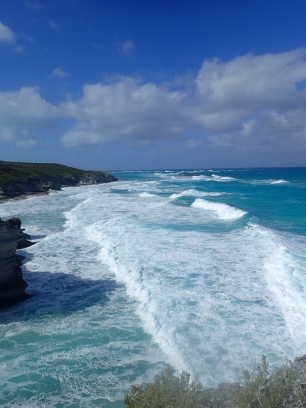 One of my enduring worries when I flirted more vigorously with the world of work, was over promising then under delivering. Not providing or doing what you say frays the end of my sensibilities.

Our attempted fridge / freezer repairs on Long Island flirted with this category. People committed. Then retracted. The only sensible option appeared to be an about turn, quick march and present arms back to Hi De Hi world, aka George Town.

Frustrating though this was, we pulled onto the dock at 7.30am awaiting an appointment with fridge man at 8.00am only for him to arrive at 7.45am. The signs were good. As Dave had suspected, gas was non existent in the system. One of the joints was a smidgeon loose allowing a tiny leak. No gas = no cold. Fridge man had gas. This was good news.

Our other gremlin, water in one of the fuel tanks has hopefully been sorted with the poor man’s / Blue Peter* version of fuel polishing. A stick, a pump, some tube and empty containers. Just needed some sticky back plastic. Plus a Good Samaritan called Ross who came to lend a hand. I went for a little paddle board while the pumping took place. He volunteered!

Our last afternoon / evening on Long Island provided us with a weeny teeny bit of vicarious fame. The story starts years ago. Many years ago. Dave and I planned to bugger off and do some sailing, Miv was going to build a house, Linn wanted to make a film. All parties here were asked on many occasions, when are you going, when’s it happening, have you finished …blah blah, yada yada. These things take time.

Well Miv lives in his house, Dave and I will have been floatin’ for 4 years this June and Linn won a BATFA for being one of two producers for their film Bait. The WiFi at the beach bar provided the means as we followed the award ceremony online. Our immediate social circle celebrated as the winners were announced. As mentioned already, we happily accepted the fame vicariously. Bloody well done. The film, shot in black and white, tells the tale of a changing Cornish fishing community. I believe its doing the rounds in cinemas large and small. Go see it. It won a shiny gong for our buddy Linn.

Back from celluloid to sails, we plan to leave Friday from The Bahamas to head towards Jamaica and Panama. Weather will dictate how far we go in one hit. It’s now time to go and find WiFi to download more podcasts for the passage. 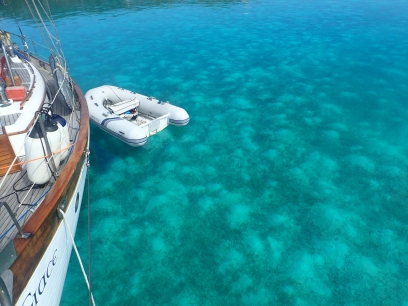 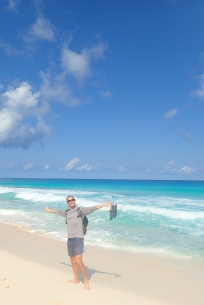 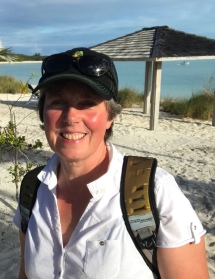 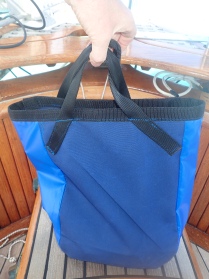 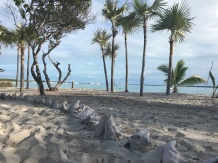 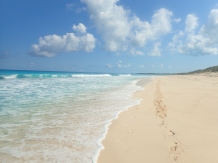 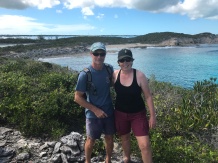 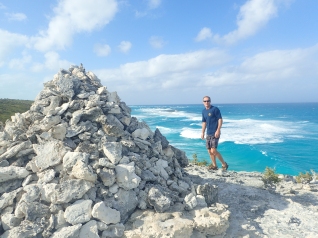 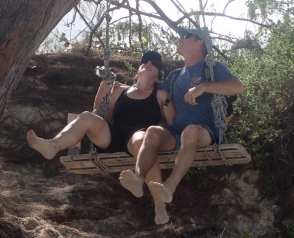 The Adult Holiday Camp. I can report it’s alive and well here in George Town, Exumas.

The day starts at 8am with the ‘Hi-Di-Hi’ call to arms shepherding in the daily activities on the VHF. Days can be filled with such offerings as yoga, boaty talks, dominos, aqua aerobics and the Men’s Huddle or the Women’s Bible study group, which I think are essentially the same thing but divided by chromosomes. Why men and women can’t do God together who knows?

We managed quite easily to fill our days without venturing towards the organised activities. There are trails to walk. And sea to swim in. We also spent a couple of days in the company of Pete Goss and his fab wife Tracey. He’s a proper proper sailer and adventurer (google him) and a genuinely lovely bloke. He has tales to tell in a wholly appropriate understated way. Suited me and Dave just fine

And we now have more horses. 😀 Not the four legged variety but the tiny ones that live inside an outboard engine. I’ve been coveting these for a while, years in fact.

We bumped into some folk on a beach who had a brand spanking new 25 horse power outboard. I commented on it and found out they’d sold their old 15 horses to another couple who now had 9.8 horses to sell. Just right for us. That’s 5.8 more horses than we had previously. The dinghy now gets up on the plane with both of us in it and whizzes across the water. This makes me very happy. We can head out to snorkelling spots which are further away plus have more choices to where we choose to anchor.

We were planning on leaving Long Island and heading down towards Jamaica and Panama early this coming week. The winds look good. But we have a fridge gremlin. The fridge seemed to be working harder than normal but we thought it was okay. Us foolish peeps. It’s now working like a proverbial Trojan but with not much associated coldness. So all our frozen food is distributed in other people freezers. Ricky is coming to look at it on Monday morning. Kermit wasn’t available. That’s his name, honest.

Plus we discovered we have some water in one of our diesel tanks. We imagine we must have picked up some dirty fuel somewhere along the trip. We haven’t used this tank for a while. We swapped on to it as the other tank was getting pretty low. The engine ran fine for five minutes then cut out. I was taking the anchor up at the time. Back down it went and the investigations began. Thankfully we were in a large sandy bay and not motoring through a narrow coral channel when it happened. Oh well. Small mercies.

Wow, it’s the first of February today. I’m hoping Ricky can work some fridge magic so we can get on our way.