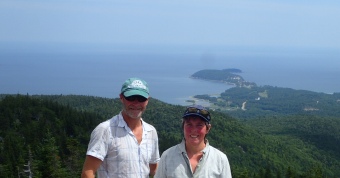 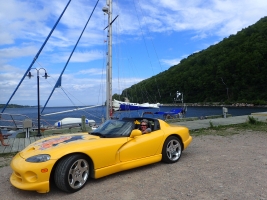 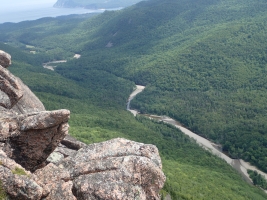 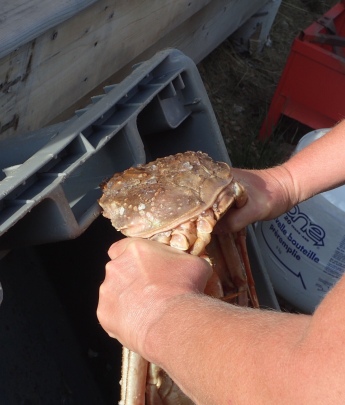 Newfoundland is delivering well on the fog quotient. We have been here in Port aux Basques one night and today was a public holiday. Imagine a typical british bank holiday but with a layer of wet dense fog cloaking the view. There you have it. We, of course, went for a 2 hour hikette along part of the coast. It was quite gloomy. 😀

Rather than being anchored as normal, we are on the public dock. It’s about £6 a night. A load of laundry is 60p. The WiFi is strong and we can pick it up on the boat. We like this kind of pricing. When the fog lifts and the sun shines, it’ll be a very different place. Fingers crossed.

Our last destination in Nova Scotia was Ingonish. We met a lovely local couple on the dock who took us under their wing and ferried us about generously so we could walk a couple of trails. They also treated us a snow crab cookout at their cabin. I’m now a whizz at dispatching, cleaning and cooking said crustaceans. Boy do they taste good and sweet. Allan also has a Dodge Viper, an 8 litre, 10 cylinder muscle car and he took me out for a little spin. In return, we took Allan and Corein out for a sail on Grace. He’s in the market for a sail boat and hopefully we were able to increase his knowledge a modicum. Our time in Ingonish was special.

As I write, the kerosene heater is getting a work out. Dave has an Ikea blanket across his knees as he finishes his book. We’ve watched a couple of episodes of a series recommended to us on Netflix called Longmire which looks promising. There you have it. A summer evening in Newfoundland.

4 thoughts on “Crab and viper”