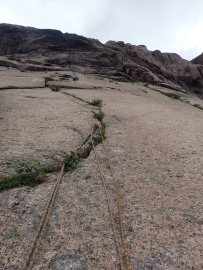 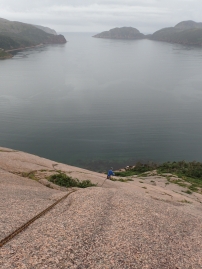 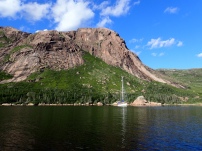 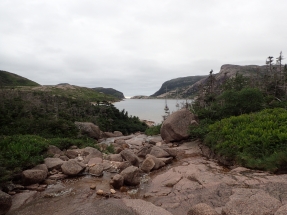 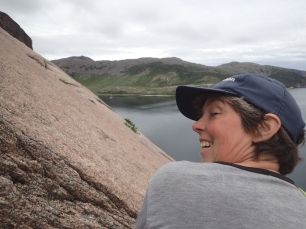 We found what we came to look for in Newfoundland. No U2 ‘I still haven’t found what I’m looking for’ for Dave and H. La Hune Bay is a truly stunning place. The understated Mr Savage has spent the last three days saying ‘wow, this places is just amazing. I’m blown away by it’. For those of you know Dave well, that’s praise indeed. It’ll be tough to top this place for grandeur, scale and pure beauty. Plus we saw an otter.

We availed ourselves of a little rock climbing expedition one day. With no guide book, it was ‘make it up as you go’. Dave was route finder general. It was impossible to have a good gauge on how high this particular cliff actually is or how difficult it was all about to get. In the end, the rain came and stopped play and we sensibly backed off. We were 5 pitches up with the climbing being relatively easy but the position was quite committing. We abseiled off in 3 rope lengths with a bit of scrambling and hand lining at the bottom. Drinks deserved that evening.

Now we are in France. I kid you not. Miquelon and Saint Pierre are two French islands off the Newfoundland coast. We have been visited by customs, dug out the euros to buy bread and been filmed by French television who were collecting footage and stories for a piece on visiting boats. It all feels a bit bonkers but the French atmosphere pervades and St Pierre, where we will head to tomorrow, is apparently a tourist destination with restaurants and gift shops. That’ll be a contrast to uninhabited fjords you can only access by boat.