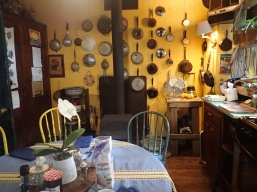 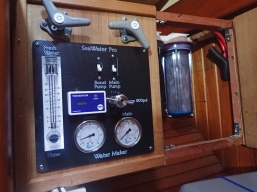 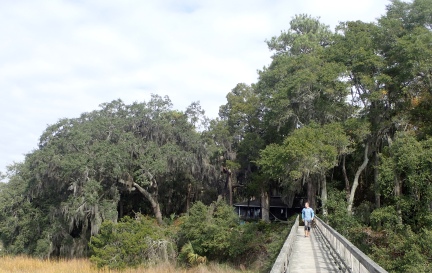 When Coleridge’s Ancient Mariner goes a bit loopy, one of the lines of his poem, if I recall correctly  is something like…’Water water everywhere yet not a drop to drink”. Well Mr Coleridge, this is no longer the case on the good ship Grace. Some factual revision is needed in your epic poem.

Correctly assembling a low and high-pressure pump, a selection of valves and pipes, some standard filters and a membrane means through a reverse osmosis process, we can make drinking water from sea water. Friends who already have such trickery suggest being able to make water is a game changer in terms of the independence it provides. We were both pretty excited to taste salt free water for the first time as the dave and helen assembled machine (mostly dave) chugged into action with only a modicum of initial leaks.

It’s taken more than a couple of weeks to work out where all the individual components would live, installing these elements, followed by some tidy cabinetry to hide all the inner workings of this poetry challenging assembly. I don’t recall exactly how many trips we had going back and forward to the hardware store. How was it that after spending a whole day pulling together a through and definitive list of different joints and valves and pipes, on double checking the list the following day, we discover day one’s list is inaccurate and needs amending. How? Why?

Jobs such as this make me feel like I might end up living in boatyard forever as time stretches out with no immediate end in sight. Sadly a single guy did die on his boat when we were in the yard. A whole array of emergency services with flashing lights turned up but nothing could be done.

It’s not really a time to divert attention from what’s going on. We happened to be installing a new life raft. Dave was balanced on two planks which themselves were balanced between the boat and the dock. He was slowly manoeuvring the heavy load up the planks into its cradle.

A boat went past, swell rode up and one of the planks dislodged. How Dave managed to cling onto the delicately remaining dancing plank with the raft,  I’ll never know but cling on he did. No resounding splash ensued. No attention was drawn. embarrassment avoided. No story to tell…just.

We are currently 7 miles from the inlet into Beaufort South Carolina. It’s 4.51am. Dave is asleep. We’re motoring as the wind has disappeared. Unlike last night on the passage down where we had sustained wind between 25 and 35 knots and a rather damp cockpit at times. Very much water water everywhere.

One thought on “Ancient Mariner”