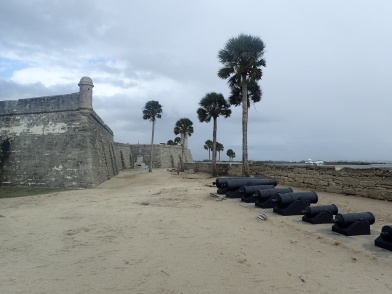 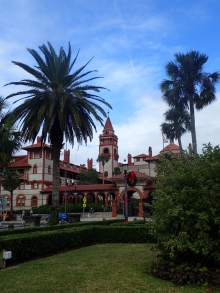 It’s called the Sunshine State, and maybe it is in July and August, but here on 27th December it’s hooning it down good time. Our small armada, two boats, the Windora’s starring Phil and Linda, plus us on Grace eventually escaped Bluffton, passed through St Augustine and Titusville and dropped anchor in the Cape Canaveral vicinity.

Once again, we boat refugees were adopted into an American home for tea and medals and a full on Christmas Celebration. A collaborative effort delivered a lunch spectacular for 14 people. Dave made his infamous 4 hour gravy which proved a hit all round. Chris’s house became the focal point for four days as errands were run, boats were mended and improved and day trips were embarked on.

My day trip was to the Magic Kingdom. I believe a good two thirds of the American population descended on Disneyland on Christmas Eve. The queues and general human throng was immense and initially disconcerting. But Disney is Disney and they do their day job very well. I’d challenge even the most cynical of folks not to crack a smile as the Christmas parade goes past or the CGI Monsters Inc show interacts ingeniously with the audience. You’re never too old to go and enjoy the magic. Just maybe go on a quiet Wednesday in November, not Christmas Eve. Oh, and start saving now. Your cash will magically disappear.

Dave chose not to make the trip, instead staying to install a new alternator on the boat. For you technical bods, this hulk delivers 75 amps at tick over. If this means nothing to you, that’s cool, all you need to understand is it makes Dave very happy.

Back to the weather, it’s been darn right difficult and uncooperative as we look for a window to cross the Gulf Stream to get to the Bahamas.  And then down to the Exumas to meet friends there. But a window is promised on Monday so we are lining up to take full advantage. Meanwhile it’s still pouring, Dave is moist and I’m hiding writing this missive. (Maybe I should write something akin to War and Peace to stay out of the rain)