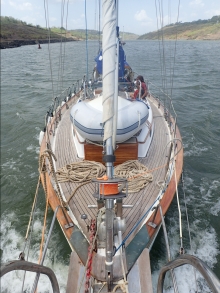 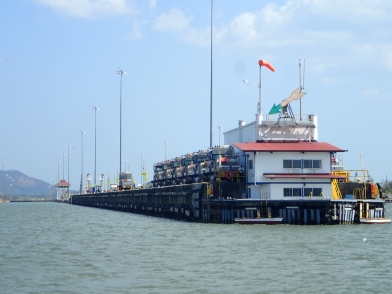 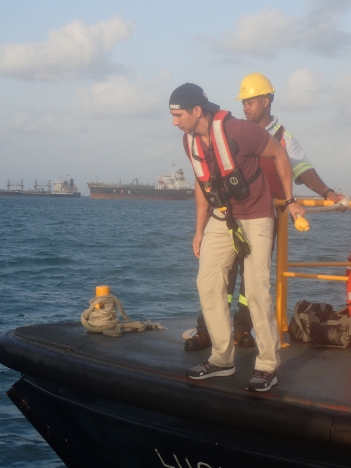 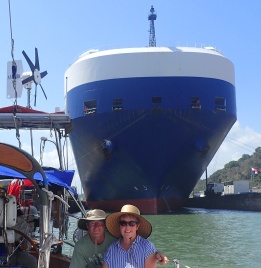 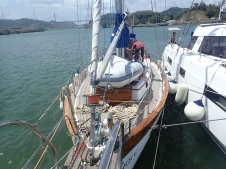 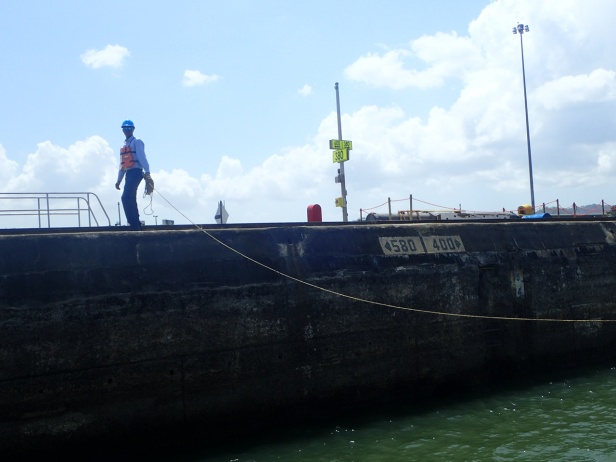 Part One. It’s a bit longer than normal. Stay with it!

As the great Dr Seuss poets….

So….
Be your name Baxbaum or Bixby or Bray
or Mordecai Ali Van Allen O’Shea,
you’re off to Great Places
Today is your day!
Your mountain is waiting
So…..get on your way!

Our mountain was six locks and a lake between two oceans. A heady mix of trepidation and excitement floated around Grace for the two days before our Panama transit. We purloined an extra line, a few more fenders and three crew to help. Regulations dictated we needed to be a minimum of four line handlers plus Skipper Dave.

Our tiptop crew were Spencer, Diego and Melanie. Diego and Melanie came as a unit. They hadn’t done much boating but were great listeners and quick learners. Ideal. Plus they built their house in Mexico out of bamboo. They shared photos of the geodesic structure which filled us with awe. It was truely stunning. Grand Design’s Kevin, you need a trip to Mexico.

Spencer is from near Hull, our original starting point so we had an immediate connection sharing stories of Hull boozers. In his early twenties, he’s the 3rd officer on humongous ships moving Liquid Petroleum Gas around the world. He’d been through the canal before but on something a tad larger than Grace. This would be a new experience for him too.

That’s the crew covered off. We’d have two more people on board during the transit, Eduardo on day 1 and Jorge on day 2. Each boat has an Panama Canal advisor / pilot on board who knows the canal, the locks and the planned schedule of all ships, big or small, transiting that day. They keep in touch with ‘Control’ by radio so are informed immediately of any problems, delays or changes to the schedule.

The monster ships get priority. You don’t really want to play chicken with a several thousand ton vessel. We sailing boats are tied (not literally) to a particular ship transmitting in the same direction. Our timings would be dictated by their schedule. Our ship on day one was delayed meaning we didn’t start to enter the first of the three up locks till 7pm. We’d been ready since our original start time of 2pm. Both Eduardo and Jorge independently described the schedule as fluid and constantly flexing. Yes, they were right.

Boaters are offered a choice of how they’d like to transit as part of the necessary paperwork completed beforehand.  Options for the locks are:-

Our nest consisted of a catamaran in the middle with Grace on the right (starboard side) and another sail boat on the left (port side). It wasn’t the most confidence inspiring start.

As we were rafting up, a woman crew member stood on the lower bathing platform at the back of the catamaran pulled a rope that had a heap of slack in it and disappeared overboard into the drink. Sh*t. Luckily she was still holding onto the rope so was able to get pulled back in pretty quickly. It was getting dark and the three boats were tied together. It wouldn’t have been a quick easy manoeuvre to turn round and pick her up. At the least the crocodiles weren’t biting!

Dave and I saw this situation play out, out of the corner of our eyes and both of us knew she was going to end up overboard. It almost happened in slow motion. In She wasn’t the most situationally aware individual at that moment in time. And as the catamaran was going to be the main manoeuvring vessel for the raft, its crew didn’t inspire immediate confidence.

Ah well, onwards and upwards. Literally and figuratively. Into the first lock we go centrally behind our massive ship. The upwards part would gain us about 85 feet or 26 meters of height across the three locks, so a height lift of around 8 or 9 meters per lock. We’d exit the third lock into the fresh water Gatun Lake.

So a quick description of how it all worked. Two line-handlers on each lock side throw down a light line with a monkey’s fist knot, about the size of a tennis ball in the end to provide weight and help with throwing accuracy. You wouldn’t want to be hit on the head by this. It was pretty solid and chunky. And the paperwork involved would be excessive.

One line went to the front of Grace, the other to back. The same happening concurrently on the other side of our raft. We then attached our 125 feet dock lines with a bowline tied in the end, to their light line and the dock line handlers pulled these up as they were walking along the top of the lock. When we were in position the bowline was dropped over a bollard and us crew pulled in tight to secure the nest of boats in the lock.

A few moments passed as the lock gates closed behind us, then water entered the bottom of the lock and up we started, At first it was pretty smooth but as the lock filled, the turbulence increased with weird patterns and swirls. This would not be somewhere to step off the back of your catamaran. Take note lady.

As the raft rose, we crew took in the lines to keep the raft square in the lock.  Melanie and I worked together at the back of the boat while Spencer and Diego were at the front. It was reasonably heavy work but we girlies were up to the challenge.

When the lock was full and the water pressure equalised, the lock gates opened and the catamaran motored the raft with its twin engines to the next lock. The line-handlers picked up the bowlines and dropped them into the water with the light lines still attached. We hauled them in quickly till all of our dock lines were back on the boat. The line handlers walked forward to the next position holding the light lines, looking like they were taking a dog (yacht) for a walk.

And so the pattern continued till the third lock gates opened and we exited into the aforementioned freshwater Gatun Lake. A swift 10 minute motor saw us moor to a massive buoy at 10.15pm. Eduardo departed, while we demolished dinner and a beer each. We were knackered. It’d been a long, slightly nervous but fun and enjoyable day.

Our next pilot would be with us at 7am. Time to sleep and prepare for day two.

Instalment two will be winging its electronic way to you soon. When I write it. 😀

One thought on “Canal – part one”