My Mum is sadly no longer with us but if she was, I know she’d be astounded and amused as I’ve taken up sewing. As well as finding time to bring up 4 kids, play tennis, star in the local ‘am dram’ productions, pick pounds and pounds of strawberries (we had a very large garden), she was for a time an accomplished teacher of what was then called domestic science. Which included teaching sewing.

I never had a whole heap of interest in such things and probably / certainly spent time dissing it as a skill. There was dog walking, throwing stones in the river or balls of various shapes and sizes to be hit to occupy my time.

Many years later, subliminally I must have absorbed some level of skill as I’ve almost completed making new dinghy and outboard covers. Not perfect, the stitching is a bit wobbly, but hey, my friend Ken called round last night and was impressed and that is good enough for me. So thanks Mum. Just a few years late!

Dave has been testing his woodworking and varnishing skills. Oh and metal working skills as he’s made a stainless steel bracket for the AIS antenna.

In writing this its occurred to me that our nephews and nieces are probably absolutely delighted we’re leaving the country as God knows what kind of ‘crafty item’ they may have received as a gift for Chritsmas this year.

We’re on countdown. Hope to be departing in mid June. 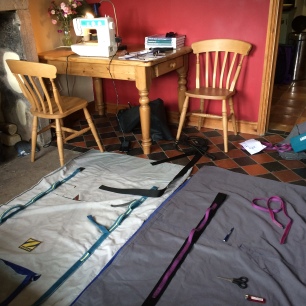 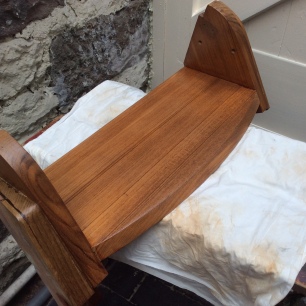 Top step of the companionway getting a spruce up