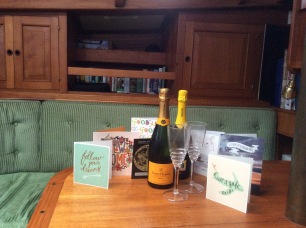 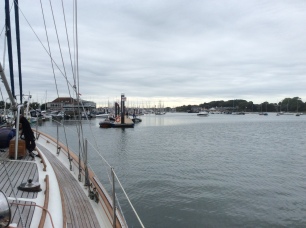 Isn’t technology great. We’re waiting for the strong SW winds to abate before we head cross channel to Jersey. The wifi booster on the boat is doing its stuff and Dave is streaming the British Grand Prix and I’ll be able to watch a bit of Muzza playing in the Wimbledon final later. Just like being at home on a Sunday without the gardening.

We’re in Lymington having had a night at anchor in Studland Bay. We spent several hours yesterday stowing more tools and emptying the remaining boxes. Everything now has a home and the boat looks great. The generator is all plumbed in and working A-okay, the batteries are doing their stuff and the fridge after a couple of temperamental outburst is behaving.

Having been ‘liveaboards’ for two weeks now, we’ve both relaxed into our new lives and getting used to balancing work stuff, maintaining the boat, journeying and just having a bloody great time!

I’ve lost count of the number of friends we’ve seen over the last few weeks, both in Cromford before we moved out of the cottage, in Hull and now on the south coast. Most recently, Linnit, Sarah and family, Mark, Nathalie and Francis, and Fi and co. yesterday. Thanks folks for all the good wishes, cards and gifts.

We’re off to buy some diesel to top up the tank before heading south. I’m looking forward to chasing the sun.