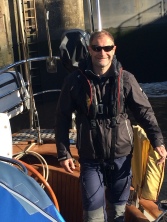 Dave in the lock in Hull 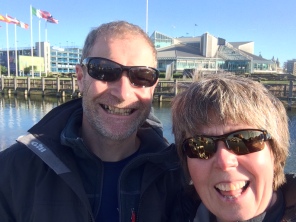 Every journey starts somewhere. Ours started in Hull. Actually it very nearly didn’t start at all. We arranged to lock out at 7.15am. Got into the lock fine and the water levels were adjusted by the lock keeper. One exit gate opened, the second refused to budge and appeared to be jammed shut. Looking through the gate we could see rampant brown water heading down the Humber to Spurn Point and out into the North Sea.

Lesley, the lock keeper frantically ran round the gates after some jiggery poker and lock keeper magic, the gate slowly lumbered into life with a couple of lurches. Phew, we were able to escape Hull, which was reassuring as the water level was dropping fast and grounding in the lock would have been an inauspicious start to our trip.

The trip to the river Hamble on the south coast took us 56 hours non stop. We were both pretty bushed but happy by the time we moored up as the trip was eventful with battery problems, strong winds but thankfully, no rain as we managed to dodge the thunder and lightening storms that appeared to be dancing across the Lincolnshire and Norfolk coasts.

So we’re current sat in Hamble Point Marina. The battery problem has been addressed and the generator is working now as a couple of guys from Fischer Panda have been on board today installing it and testing it. The fridge is stocked and the water tanks are full to brimming.

Our friend, Lovely Lisa happened to be in Hamble yesterday so she became our first overnight guest. We escorted her to a taxi at 6.45 this morning to get a train back into Maidenhead for work. Shame. She has been known in the past to stow aboard… She came unexpectedly to the Isles of Scilly with us a couple of years ago. We like a bit of spontaneity.

Our next move is to Studland Bay to hook up with more friends then cross channel to jersey this weekend sometime. It’s sunny, shorts and t shirts weather so life is very tolerable.