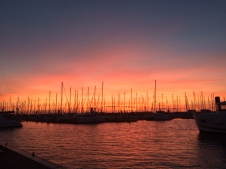 how does this self steering work?

Rounding the southern corner of Portugal 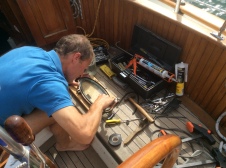 The galley window no longer leaks 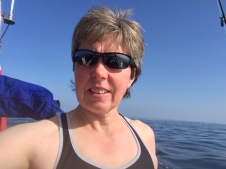 1st November in a vest top.

Dave having a top sunday

Cascais climbing
We do loads of reading on the boat. I thought the kindle / iPad option would be the way forward but the good old fashioned paperback is best because you can trade them. Apart from news and as we’re both news fiends, the tablet / phone option comes into its own here.

During this week’s reading two names have stuck in my mind. Newt Gringrich whose name has popped up in the US election propaganda and a lady called Binky Urban who has a credit in one of the books I’ve just read. If you have a name like Newt or Binky does that colour how other’s perceive or interact with you? When I was about ten at school, there was a girl in my class called Sarah Major. She was adamant that if she had a kid, she was going to call it Barnaby Frog. At the time it seemed outlandish and well, just mad to me. However in 2017 it sounds pretty run of the mill! When I next have wifi I will google Barnaby Frog and see what transpires. Perhaps there is a Barnaby Frog somewhere out there. Funny how I don’t remember any useful physics or historical dates …..just Barnaby Frog.

When we first bought Grace, she wasn’t a Grace. She was a St Wilfrid. St Wilfrid was an early Christian saint from Northumberland who headed off on lots of pilgrimages enjoying a party along the way. Because of the parties he then had to go on a pilgrimage to ask for forgiveness. Sounds like he existed in a relatively persistent cycle of behaviour but had a nice time along the way! Good on you St Wilf.

I liked the Northumberland connection with it being my home county but having a boat named after a Christian saint didn’t fit for us. There is a bit of nautical folk-law that renaming your boat is unlucky. When I delved into this a bit further, the name of the boat would traditionally have been carved into the bottom of the boat. Any renaming involved chiselling and sanding to remove the old name then more wood routed out to carve the new name. Hence less wood gives you a less structurally sound boat and perhaps a more vulnerable / unlucky one too.

Our biggest quandary about renaming the boat was what to call her. Boats are usually female and we wanted something that reflected the boat’s character and kept the Northumberland link. We take little credit for the name Grace of Longstone. It was all my dad’s work. Grace Darling was a young Northumbrian lighthouse keepers daughter who participated in a rescue of several crew after their boat ran ashore on the Farne Islands in 1838. She rowed out with her father from Longstone Lighthouse in a storm after first spotting the floundering vessel. Grace subsequently became a bit a of a local heroine and is still remembered today.

So that’s the backstory to the name of our boat. We think she’s pretty graceful and the name sits well with her.

Yesterday we left behind the Atlantic Portuguese coast and headed along the Southern Algarve coast and are now in Lagos as our chum Miv is coming to visit for a few days. We’ve been around Lisbon and Cascais for over a week, enjoying the city and to Dave’s delight we found some climbing too. The engine has been serviced with filter and oil changes, the gear shift cable has been replaced and the outboard has been overhauled too amongst other boat jobs. Our friend Danny gave us some help with the self steering. Still some work to do to get the thing set up properly but definite progress. We need it to be in fine fettle for when we head to the Canaries. Hand steering for 5 days is not a prospect to cherish.