Tuna in the fish market….not from my rod 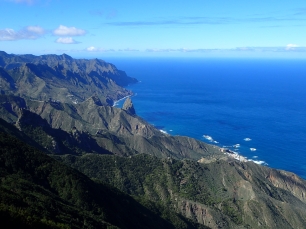 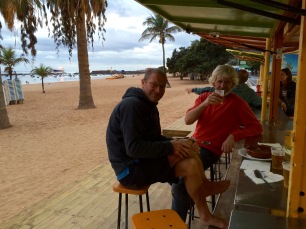 Most of the chat around the marina is focussed on ‘when’ do you plan to leave?’ When…..It’s a simple little word that basically asks for a time. Western society runs by the clock. Tenerife, particularly the postal service and the courier companies work on their own particular brand of time.

It stretches out like knicker elastic, interrupted and skewed by customs and a supposedly helpful email tracking system.

We await the delivery of four packages. One, which contains a new starter motor from the UK, we know has been on the island only a few kilometres from the marina for several days. Our ‘when’ is dictated by the arrival of these packages.

Several days later……Hurrah. Christmas has come early. 3 packages turned up yesterday teatime. Tomorrow will involve lots of scrabbling around the engine in uncomfortable position in preparation for an engineer coming onto the boat on Tuesday. I have knee pads. Dave is hard core being a caver in the past.

To celebrate our packages we went to a beach bar north of Santa Cruz for early evening drinks. It was Friday after all. The sun was pretty much down but we walked and paddled then sat chatting with a drink. The throng disappeared until there were only 3 or 4 punters left plus a local band of 4 musicians. They came over; two guitarists, one violinist and a guy playing percussion. They said they wanted to play so we were treated to 4 talented guys putting on a Friday night show for just us. Completely random, lots of fun, an array of pointing, smiling and gesturing to get over the language barrier and all in all a great way to end the week.

We have done a bit of exploring too. Our friend Pete has been to Tenerife before and recommended an area to go climbing so we had a fun afternoon near Arico. Julian came to stay for a few nights and helped with on going programme to remove squeaks from the cabin floor. We ate well, laughed lots and shared many stories.

So we hope middle to late next week will be our ‘when’. We need to do the Big Shop but have sussed out a supermarket that delivers to boats. Very handy. There’ll be more boat checks before we feel ready to depart. 20 ish days is what we expect for a crossing to Barbados. So we’re likely to have Christmas at sea. Can you get turkey in a can?