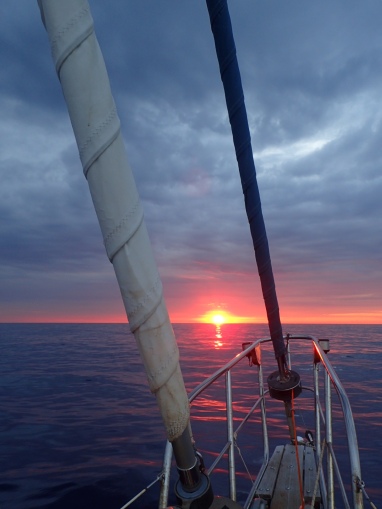 We’re setting off in about 3 hours to look at green hills, listen to reggae music and eat green vegatables. Jamaica. This country wasn’t on the original shopping list. But then neither was Canada. It’ll take us about 2 days to get there, departing from Great Inagua in the Bahamas then nipping round the east of Cuba and heading to Errol Flynn Marina.

We’ve just threaded our way carefully though an uncharted area of coral heads, me on the bow shouting and pointing while, dave did the driving. It’s quite an unnerving experience but with good visibility and the sun high in the sky, the task is achievable. Popping through narrow gaps with rock awash on either side is in the words of Sir Alex Ferguson, ‘squeaky bum time”.

The last three weeks or so have seen us visit many of the quieter bits of the Bahamas. We’ve travelled in the company of a few “kid” boats. There a website named Kids for Sail but of course when it’s spoken out loud, it could be Kids for Sale. Which often raises a llttle snigger. Boats with kids on, seem to actively seek out other boats with kids. Kids are happy, parents are happy. Simple formula.

So there have been many snorkelling expeditions, fires on the beach, adult social evenings while the kids watch a movie on another boat, fishing trips and assorted fun and games. The parents generally do school in the morning for a couple of hours then it would appear to be playtime the rest of the day. Unless there’s been naughtiness and said kid / Dave is confined to their cabin or banned from snorkelling that day. Kids on boats are no different to kids on land wanting their own way or trying to stamp their authority.

One of the highlights of being on Great Inagua was randomly meeting a school teacher from the local school. We visited class the following day and I pretended to be a teacher for about an hour, talking about travel and geography and comparing England to the Bahamas. It was fun. I got bit confused about the Queen and the Commonwealth, not really my top subject,  so moved on quickly!

As we left all the kids (there were 10 in the class) came up and gave me hugs. Just like in England I’m lead to believe 😀