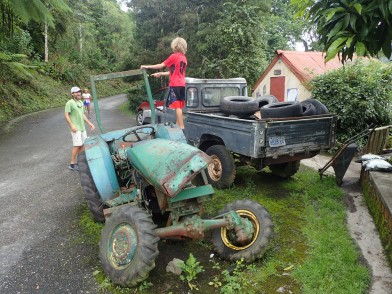 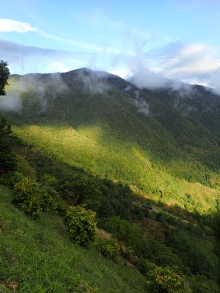 While demolishing well earned food back on the outskirts of Kingston, I asked Dave if he’d had a good time. Yes he said. It was great, lots of fun, especially watching you get into ‘group organisation mode 😀’ Well, like I said, old habits.

Jamaica is a complete contrast to the Bahamas. A 48 hour sail and we could smell the land and hear the music from far out. Jamaican music is “LOUD” with unforgiving bass meaning your chest vibrates. Volume controls seem to start at 10 and have no upper limit. There’s always a few more decibels to be had.

The country is “GREEN”, the landscape lush, vibrant and parts of it pretty mountainous. The culture is most welcoming, big smiles and fist touches. Nothing is a problem. Especially in the smaller towns and villages. Everyone seems to on the make. A few Jamaican dollars here and there. Whether you’re being charged a fair price when bartering can be hard to tell. It’s generally all done with pretty good humour. The marina however does feel like a bit of a sanctuary from the mad hustle and bustle of the street.

Then there’s the driving, the most useful accessory in the car being the horn. Driving is not for the timid or faint hearted. We hired a couple of 7 seater vehicles as transport for our gang. Dave drove one, I drove the other. Traffic allegedly, but not always, is supposed to stay on the left, so being the two Brits in our multicultural gang, it was more familiar for us than our Americans or Canadian friends.

One day, we took the main road to Kingston to get visas from the Cuban Embassy. It’s a two and a half hour trip across the mountain. We came back in the dark. In hindsight not such a great idea. Getting out of Kingston was, well, mental. Cars, buses and motorbikes piling in from all angles, a cacophony of horns, people hanging out of buses, some random, almost certainly stoned individual directing the traffic made it a full on sensory experience. My passengers occasional screamed, put their arms over their heads, yelled it’s the yellow bus again and winced as cars passed us with molecules between vehicles. This was the A road experience.

So much fun, we took the B road the following day across to the start of our hike. Twists, switchbacks, narrow bridges, over hanging rocks, the road just kept giving. We stopped at a family run coffee plantation on the way which had amazing views across the hills. Then onto the police station in Mavis Bank, the meeting place for the 4×4 which would take us the 5 miles to the start of the hike.

The gang was made up of Dave and I, the family from S/V Piper, Mum, Dad and two kids aged 8 and 10, the family from `S/V Andromede exactly the same makeup as Piper and a lass from a boat called Barefoot Two. Her bloke doesn’t do walking so he stayed home.

A really good time was had by all. We hiked up to the basic hut, cooked food, hung out, chatted then summited the following day, retracing our steps back to the drop off spot. Some slept. Some didn’t. Some were cold. Some worried about bugs. Dave and I were just fine.

There were lilies, fuchsias, wild strawberry plants, red headed woodpeckers, yellow berries, cigar plants, humming birds and inevitably a bit of rain and cloud. Well it is a rainforest. And a hike.